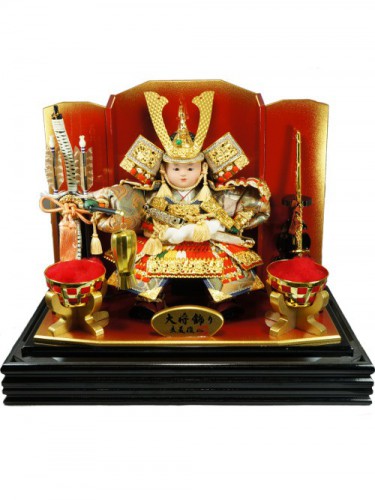 This impressive decoration portrays a Samurai Captain with its traditional outfit: full armour and helmet. The figurine also called "Gogatsu Ningyou" is exposed in the houses for the children's day, may the 5th in Japan. It enables to wish happiness and health to them for the future. The warrior representations are often used for this event because it represents strength, ambition and bravery.

The warrior captain holds a Saihai which is a baton carried by Samurai and allow them to signal their troops during a battle.
You can find on the presentation board, a bow with two arrows and a Katana exposed on each side of the warrior. Its helmet or "Genji-kabuto" dated from Kamakura Era (1185-1333) and is composed of a Kashiradate with a dragon shape and 2 Kuwagata on the helmet to impress his opponents.

The captain armour is mainly composed by:

The decoration has a japanese style power plug behind ( same as American power plug) which switch on 2 small lights on each side of the figurine (in the small bowls with the red ornaments).

It is possible to use a 220 volts adaptor (or your country energy voltage) -> 100 volts (japanese energy voltage), but this is not recommended for security reasons.

The contribution of the lights being very limited, we recommend to let them on the bowls hidden under the ornaments, the electric cable can also be hidden under the figurine, or it can be cut without any problem.

20 other products in the same category:

New
Add to Wishlist
On order, shipping within 2 ~ 8 days.